I'll admit it - I'm a (recovering?) label queen. If a product isn't Chanel or Nars or Urban Decay, it must be worthless, no good, and to be avoided! Of course, I know this isn't rational; an inexpensive price-tag doesn't necessarily mean subpar quality, just as a high end label doesn't automatically signal greatness.

In order to relieve my negative preconceptions I'm attempting to branch out and try new, cheaper brands, opening myself up to being pleasantly surprised. I got the perfect opportunity to try out this newfound optimism when my mother brought me one of the Sally Girl Mini Nail Polishes. 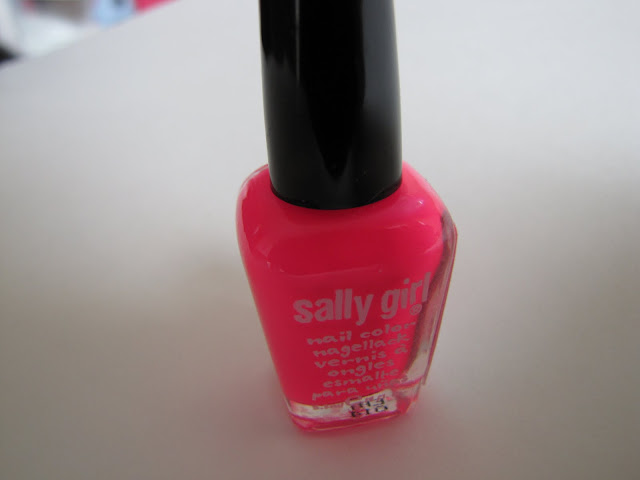 These minis come in cute 0.18 oz bottles, and will set you back a whopping $0.99. I have NO idea of the name of the color above - in the bottle it looks like a bright, medium hot pink. On the nail it's darker, more of a neon berry. 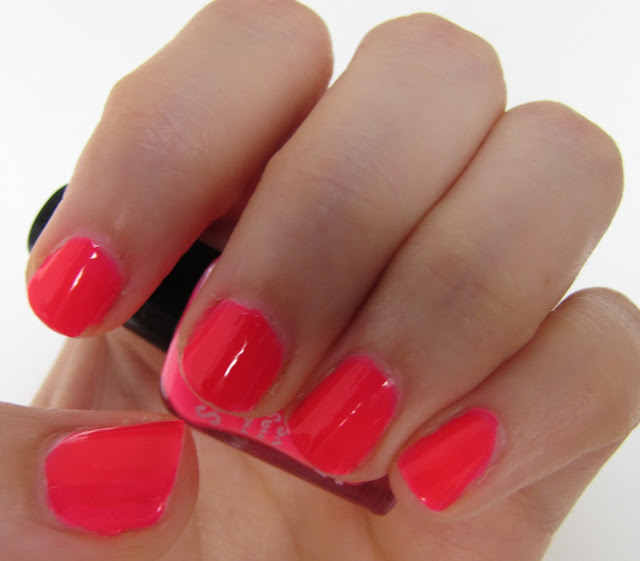 Overall the brush wasn't terrible (medium and flat), though a few stray bristles were sticking out. This didn't hinder application, however. What you see above is three thick coats and you can still see my nail line, rather annoyingly. The polish is a satiny matte that refuses to even out - without the topcoat, it was a streaky, tacky mess. Perhaps a fourth coat would have helped, but I didn't enjoy the color enough to put in the extra effort - the shade is fine, but a bit uninteresting and something I've seen a thousand times over.

In terms of staying power this particular Sally Girl has ZERO, even with the winning combo of Zoya's Anchor as the base and Posh as the topcoat. I'm not exaggerating when I say this was the shortest-lasting lacquer I've ever tried. The day after application at least half of my nails experienced bubbling and lifting. One nail lifted off entirely, in one clean piece. The following day every nail had either lifted, chipped, or bubbled. Ugh!

As much as I was hoping for stumbling upon a great enamel at a bargain price, I can't get behind the Sally Girl Mini Polishes - too much streakiness, too much sheerness, and not enough longevity.

Alas, my quest for quality Beauty on the Cheap continues!
Posted by Unknown at 11:11 PM